Last weekend I had the opportunity to take my BMW ActiveE to a Car Control Clinic run by the BMW Car Club of America, Golden Gate Chapter. I know the car can handle pretty well, so I was very much looking forward to driving it closer to its limit. However, since the clinic took place over 30 miles from my house, I wasn't sure how much battery charge I would use first getting there and then participating in a full-day clinic of hard driving. Luckily, there are hundreds of free EV charging stations along the route between my house and Candlestick Park where the event took place, so I decided to head up early and get a top up charge at a free parking garage in South San Francisco. After the top-up I arrived with over a 90% charge and throughout the day used less than half my charge. If I participate in a followup performance driving clinic I'll feel more confident in skipping the morning top-up. 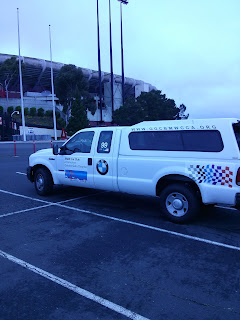 As for the event itself we rotated between three stations participating in:

I've done all of these activities before in other BMW cars at the BMW Performance Driving Center in South Carolina, so I was most interested in those exercises that highlighted performance of the electric car. The most surprising thing initially was how well this relatively heavy car comes to a complete stop at speed with full anti-lock braking. Perhaps less surprising is the fact that with instant torque, 50/50 weight distribution, and solid handling the ActiveE is great on autocross courses. 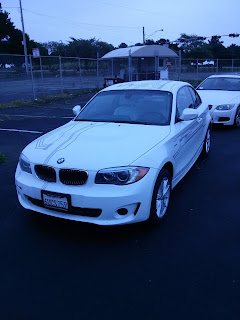 Don Louv reports in the April 2013 issue of Roundel magazine that the ActiveE doesn't let you turn traction-control all the way off so he's been unable to get it drifting sideways. On the skid pad, I had the same feeling after turning the stability control off that it was still fighting my oversteer with a bit of understeer. I could certainly get it sliding for short periods of time but it was still fighting me. The skid pad was dry however, and I didn't adjust my tire pressures, so I'd like another go at it in wet conditions to keep the car sideways longer.

One of the most amazing things about driving an electric car is the instant torque. The ActiveE is fun to drive, but it is sometimes hard to compare against internal combustion engine cars. When my local chapter of the BMW Car Club of America recently held a Dyno Day, I was eager to put the ActiveE to an objective performance test. Dietsch Werks at Club Auto Sport just installed an in-ground AWD Chassis Dyno built by SuperFlow Technologies Group to measure torque and horsepower output. There were more than a dozen cars at the event, and of course someone scheduled the whisper-quiet electric car behind an M5 with an amazing exhaust note. Luckily, nobody was disappointed with the muted electric vehicle, especially after the torque numbers started showing up on the screen. 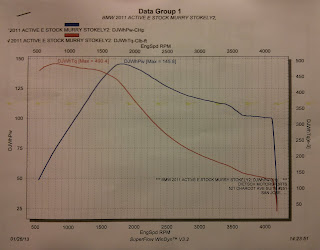 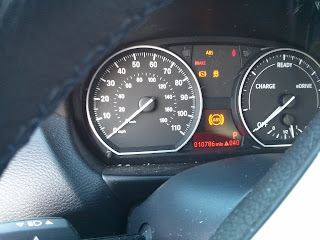 After the run, nearly every warning light on the car's dashboard was illuminated. As is often the case with the ActiveE, however, just giving it the old Microsoft Windows treatment of turning it off and back on again cleared everything. 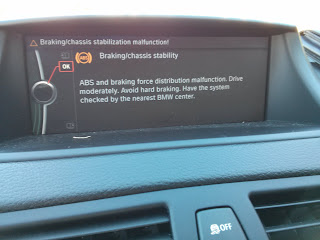 Last week we left our ActiveE home in California and flew out to South Carolina for two days at the BMW Performance Driving Center. We drove a variety of new cars on the private track, including several built in the large BMW North America factory across the street from the performance driving center. Most of our time was spent in 1-series and 3-series cars, but we also spent time in M3s, M5s, 6-series, and an X5. In all cases we averaged well under 9 miles per gallon, which was quite a change from our normal all-electric driving in the ActiveE 1-series.

Despite the EV skepticism we observed, Greenville, SC actually has a growing EV charging infrastructure footprint. Apparently Enterprise offers some Nissan Leafs for rent in downtown so we may try to spend more time finding an EV to rent next time we visit the area, instead of just picking up one of the normal lackluster economy cars from the airport rental agencies.

The course itself was incredibly fun. 90% of the time was spent in the cars driving on our own and in radio contact with the instructors, but there were a few concise classroom lectures at the start of each day and after lunch to go over the upcoming exercises. We spent time sliding around on the skid pad, on slalom warmups, autocross courses, high speed braking and avoidance maneuvers, and an off-road X5 course. The video below includes a few highlights from our course.

We're definitely going back for the M-school next year. Let me know if you want to join us!

Posted by Murray at 5:55 PM No comments:

It has been 7 months already and we've put over 5,850 miles on our electric car. During that time we've charged 196 times at 11 different charging stations, and never once paid for gas or waited for the tank to fill. One of the great things about electric vehicle charging stations, particularly those from ChargePoint is how they are networked and provide an online dashboard where you can view personal charging history and energy consumption. Our home charging station has a built in cellular uplink and is connected to an online account so all charges from home are automatically visible on the website. At public charging stations I scan an RFID card on my keyring to associate the charge with my account. 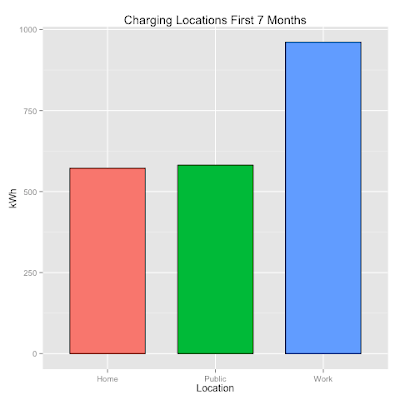 In our first month of owning the car, we didn't even have a home charger, and so we were charging exclusively for free, but not really putting that many miles on the car each day. Now that my wife is commuting further to work each day, we put over 50 miles a day and charge it up at home each night and at a parking garage in San Francisco each day while she is at work.

Parked for 31 days without any battery problems

Extended summer travel for work and pleasure had the unfortunate side effect of keeping us away from our ActiveE for 31 consecutive days. We left the car in our garage, unplugged with nearly a full charge. I was happy to find that the car started right up and still had more than 3/4ths of its charge when we finally returned to the Bay Area. I had left a USB phone charger plugged into one of the 9V sockets in the center console, but without a phone attached, so it was still drawing current for lighting a tiny LED on the charger while we were away. An indicator came on when I first started the car to note that there was excessive battery drain while I was parked, but otherwise everything was fine.

After the stories earlier this year about Tesla Roadster battery problems after extended periods of inactivity, I am glad to see that the ActiveE was fine after 31 days. If I have to leave the car for multiple weeks again in the future I'll make sure to take photos of the exact battery level before and after to measure the impact, but based on this initial experience it seems no worse than leaving an internal combustion engine inactive for several weeks.

Posted by Murray at 3:00 PM No comments:

It turns out that Mountain View BMW leased more of the ActiveEs than any other dealership in the country, and the cars are a pretty regular sight on the roads around here. I have been keeping in regular contact with engineers at BMW with feedback about the car and the Android/iOS mobile apps. Several weeks ago I was put in contact with some visiting BMW marketing people and, along with some of my coworkers who also drive ActiveEs, we did some interviews about our experiences with the cars. After a short interview where I talked about our experiences with the car, they edited the footage down to the 2-minute clip below which is posted on the BMW Activate the Future website. Also check out the videos from my colleagues, Zoomer, Nothing Like It, and Crusader.
Posted by Murray at 8:17 AM 3 comments:

I work just up the road from the Mountain View BMW Technology Center, and have had the opportunity on several occasions to speak with engineers there about BMW's electric vehicle progress and general green initiatives. This morning some of my coworkers with ActiveEs and I drove over for breakfast with them to talk about our experiences with the cars. After breakfast we got a shot of five of our cars in front of the center here. We're parked a bit awkwardly because an officeworker at a nearby office building had parked his Nissan Leaf at the public ChargePoint station in front of BMW.

As with previous chats with BMW engineers about the ActiveE our discussion was overwhelmingly positive about the cars. We are all having a great time driving the cars; most of us got free chargers from ChargePoint America; the new solar incentive program sounds like a great deal; and we've had few major issues. After three months of driving these cars our main complaints revolved around relatively minor issues -- the missing Android App, limitations and quirks of the iDrive software, the inaccuracies of the Map data provider for the built-in navigation, and the car's inability to store the driver's preferences for charging times and Eco-Drive. All in all we came away impressed by the people and the office. It is a great experience to talk with people actually designing these cars, rather than only the sometimes less-than-impressive representatives at the dealerships.
Posted by Murray at 6:30 PM 1 comment: